Pickit Founder and Co-CEO, Mathias Björkholm, took part in a round table discussion with Steve “Guggs” Guggenheimer, CVP and Chief Evangelist at Microsoft, on DECODED. See it on Channel 9. Hosted by John Shewchuk, Technical Fellow at Microsoft, DECODED is an unorthodox show that aims to pick the brains of the world’s best software engineers and share developer best practices.

Clips from the conversation were shown during Microsoft Build 2017 yesterday. Held at the Washington State Convention Center, Build is an annual conference aimed towards software engineers and web developers using Windows, Windows Phone, Microsoft Azure and other Microsoft technologies. 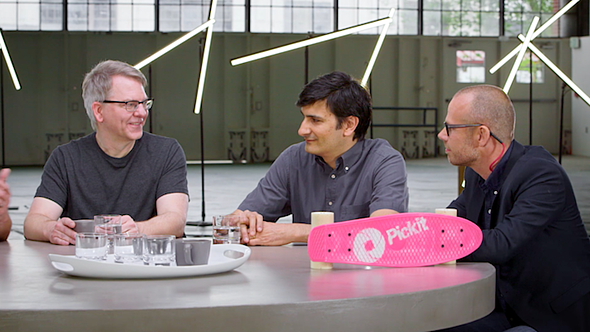 The Pickit staff in Gotland, Sweden

Pickit is an image service hosted on Microsoft Azure for making professionally curated photos, icons, and illustrations available inside PowerPoint, Word, and Windows 10. The Pickit add-in allows users to source content aggregated from leading image providers, and also crowdsource custom images from Pickit’s global photographer community. A unique Legally Cleared process ensures all content licensed and free to use for anything. Pickit is the proud winner of the Microsoft Office App Awards 2016.

Established in 2013, Pickit has headquarters in Visby, Sweden, and a US office in Redmond, Washington.