Happy summer! Sorry Southern Hemisphere, but the days are long in the north, and staycation season is going strong here in Sweden as many people are enjoying a more-relaxing-than-usual break, skipping the stress of running around airports, standing in lines, and enduring the adventures of public transport. But while traveling is still not an option at large, thanks to the power of the internet, we've been able to keep in touch with friends, family and our amazing community of Pickit users all around the globe. Given that, our wanderlust has been difficult to tame, so we decided to put our international team to work and transport the Pickit app to new corners of the world by adding localization support for four new languages. 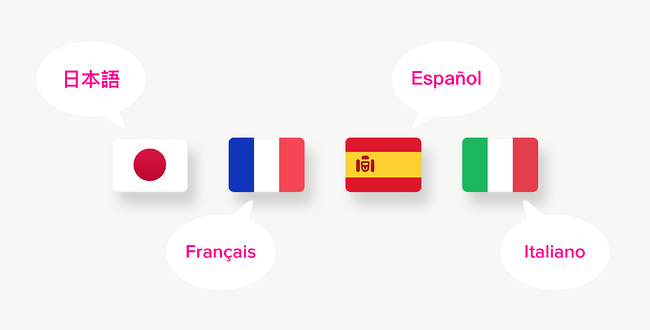 Starting in July, Pickit will be available in Japanese, Spanish, French, and Italian, enabling more people to enjoy the app in their native or preferred language. If you’re in a country where the local language is supported, you’ll be prompted with a popup before logging in asking if you wish to change to that language. You can always change your mind later: just click on “More” -> “Settings” -> “Change language” and choose your preferred language from the dropdown.

We've got even more languages in the pipeline, so stay tuned for future releases if your language isn’t supported yet. Also, let us know in the comments if you want to use Pickit in your own language, or how you've been finding it if you're one of the people who have already made the switch when we released German and Swedish a few months back.

Added support for Excel and Keynote in Documents

You asked, we delivered: you can now upload Excel and Keynote files to Pickit Documents, in addition to the formats that are already available–PowerPoint, Word and PDF files.

Pickit Documents is still in the Beta phase and expected for general availability this fall. We're constantly releasing bug fixes and improvements of this new section and your feedback is greatly appreciated. We have a couple more file types coming up until then, so let us know in the comments if you want to request a specific one.

Missed the Pickit Documents announcement or haven’t sign up for the Beta yet? Head over to this blog post to learn more.

Better performance for collections and images

Another piece of news is that we've refactored the code for Collections and Images to make images load and download faster in the add-in. We've made particular improvements to loading times for images in collections, loading search results, preview and insert/download speed. In addition to this, we’ve made plenty of smaller bug fixes and improvements throughout the add-in, so head over there and try it out now!

Don’t have Pickit for your company yet? Our product specialists will be happy to show you around and set you up on a free trial.

Pickit announces new Dropbox integration
We got prettier: Welcome to the new Pickit homepage
How your presentation images can support diversity in the workplace
Introducing Pickit Transfer, new integrations and updates
Introducing Boards