4 things to think about when using presentation images

It's been said a million times that a picture says more than a thousand words, but it's also worth pointing out that there are thousands of ways to use each picture, and how things like placement, cropping, filters and adding text can either enhance or detract both from the visual appeal and effect of the image.

It goes without saying that one of the main reasons people choose to create a presentation and not a Word doc or Excel file is so they can use photos, icons and clipart to enhance their message, so we take a look at a few dos and don'ts to keep in mind when working with presentation images. 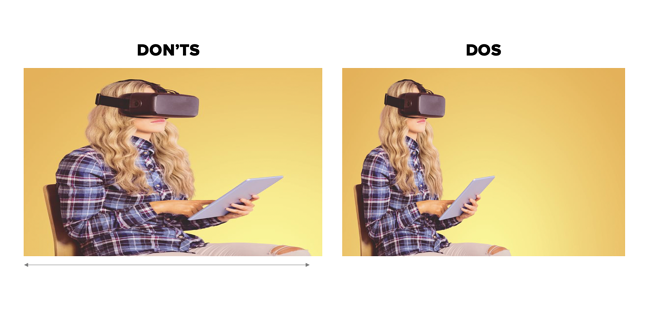 This is the designer's equivalent of scraping fingernails on a blackboard. Put yourself in the shoes of the photographer who has carefully crafted the image, taking into consideration everything from composition and background to angles and negative space, only to have the presenter come along and stretch the thing out of proportion and ruin the thing. Not to mention how the model feels about having their body reshaped and features mutated. The takeaway? Always constrain proportions when resizing images, so they don’t get stretched. If the size doesn't work, crop your image and remove some of the background or unnecessary elements if you need to, but don’t drag it out of shape.

An excellent way to keep your slides clean and avoid clashing images is to stick to one photo or background per slide and fill the screen. I realize some corporate templates have image placeholders that don't fill the screen, and that sometimes you might want to put a few bullets next to an image. That said, if you want to create a bigger visual impact and really let your image do the talking, keep the text to a minimum and fill the screen to the edges with a great image that can stand on its own.

3. Write in the negative space

A common mistake is to add text on top of an image without paying attention to what's going on in the background. One workaround is adding a box behind the text, but often an image will already have some plain areas that can be used as a canvas for your message. Try choosing a photo with negative space, and putting your text there instead of just placing it anywhere. That way, it won't obscure the subject matter in your image, and you can make the most of both the text and the visual.

If you’re using a background photo without negative space and adding text on top, another trick is to try toning the image down and increasing legibility by adding a transparent filter, or by adding a gradient shape with 80% transparency on top of the image. This will make your text pop, while still allowing the image to play a major role in the background.

Lastly, one helpful way to add images that are appropriately sized and formatted is to use the Pickit add-in for PowerPoint. It will automatically insert the image to the right placeholder and maintain the proportions, and it's even configured to work with your corporate template. Give it a try!

This was posted by Brad Hawkes, our Director of Marketing here at Pickit. He's not a professor of rhetoric and he's never given a TED Talk. He has, however, clocked up over 1000 presentations, seminars and talks over the last 15 years, picking up a few ideas along the way. He once spoke to a crowd of 5000, but mostly he's spoken to crowds of 5, and he's always looking for simpler, clearer ways to say things and get a message across. He also makes a fine cup of coffee.